AEOLUS was launched by the European Space Agency ESA on the 22nd of August, 2018. It is the first Doppler lidar in space to measure the wind at the global scale throughout the entire depth of the atmosphere. The satellite and the Doppler lidar are built by Airbus DS. Together with other research teams, CNRM develops the processors for the calibration of the lidar and the production of level 2 products of the mission. These processors are part of the ground segment set-up under ESA responsibility. Level 2 products contain wind and aerosol observations. Wind observations are delivered in real time (less than 3hrs) to weather prediction centers (including Météo-France) and assimilated by weather forecast models. Aerosol products will be used for air quality forecasts.

A France-Culture radio programme about AEOLUS can be listened in podcast. 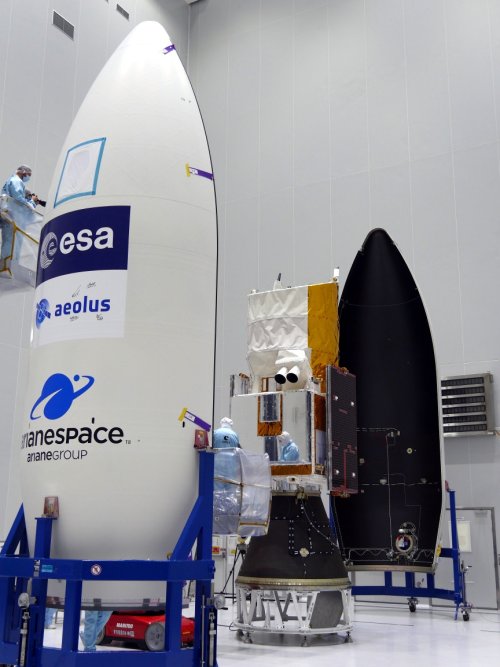 VEGA lift-off with AEOLUS on board. Credits: European Space Agency

Within the team gathered by ESA, CNRM is specifically in charge of the development of the calibration and level 2A (aerosol) processors. In both cases, a prototype code is written and tested before it is delivered to ESA for their operational deplouyment within the ground segment of the mission.

With the support of the French space agency CNES, CNRM also conduct studies on the impact of AEOLUS wind measurements on global (ARPEGE) and regional (AROME) weather forecasts.

CNRM has also contributed the development of level 2b processor that shall produce the wind information that weather prediction models can assimilate. Level 2B products contain wind information as well as correction parameters (sensitivity to wind products to the actual pressure and temperature).

At last, CNRM has been coordinating for several years the proposals to CNES of the french research laboratories for the preparation and the calibration of the Doppler lidar once it is in space/

First wind measurements were distributed a little bit more than 10 days after launch. The bias observed then was decreased with a careful on-board calibration of the instrument. AEOLUS was operated with its laser A until June 2019. Then a switch to laser B was ordered because of a slow decrease of the emitted pulse energy (from 65mJ at the beginning down to 40mJ in June 2019). Laser B is much more stable but requires a new, on-going calibration. Les premières données de vent ont été diffusées à peine 10 jours après le 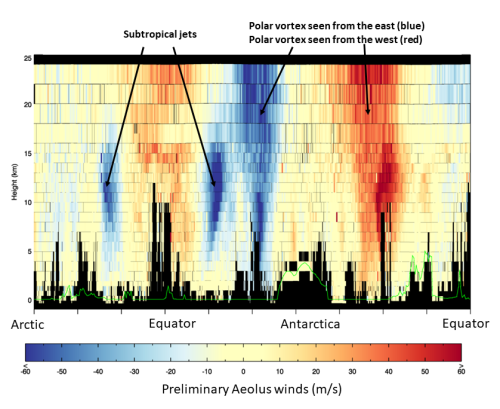